IFORS have commissioned a survey of OR practice in member countries, updating an earlier one carried out in 1996. The aim is to enable a better understanding of the usage of quantitative tools, techniques and approaches and their impact on decision-making in organisations, as well as the background of the OR analysts involved. It is expected that the results will enable IFORS to improve their support to and promotion of OR in member countries. The main instrument is a detailed questionnaire, to be completed by OR analysts/consultants in each country, who would be identified by the IFORS country representatives. As a first step, a short on-line questionnaire was sent to all country Representatives of IFORS in November 2009. The aim was to collect some basic information about OR practice in each country and to assess the likely response to the main questionnaire. This report summarises the responses as of 14th February 2010. 34 countries (of 49 emailed) completed the on-line questionnaire, as follows:

The responses to each question are summarised in graphical form and the main outcomes are then highlighted.

Question 1: General state of OR consultancy in your country (How many organisations use OR consultancy? How big is
the activity?) 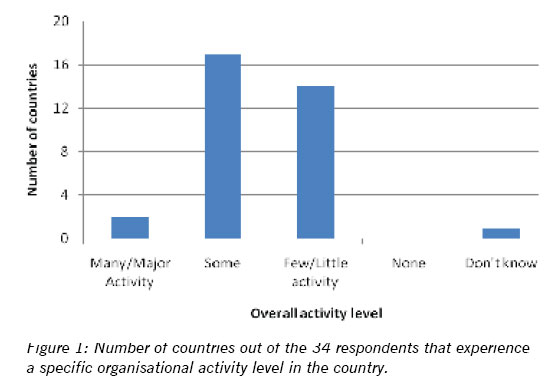 It can be seen that nineteen countries have awareness of some or much OR practice activity. 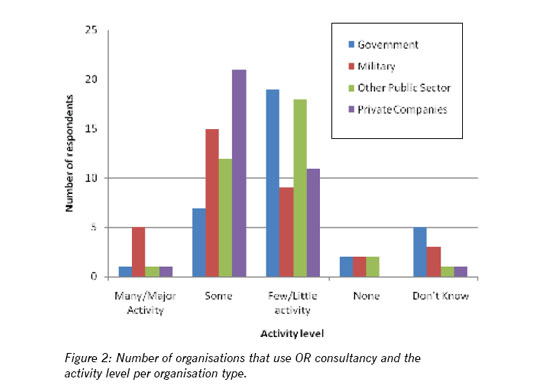 OR practice seems relatively strong in the military area.

Question 2: How is OR consultancy provided in your Country (How many organisations use OR in the following ways?) 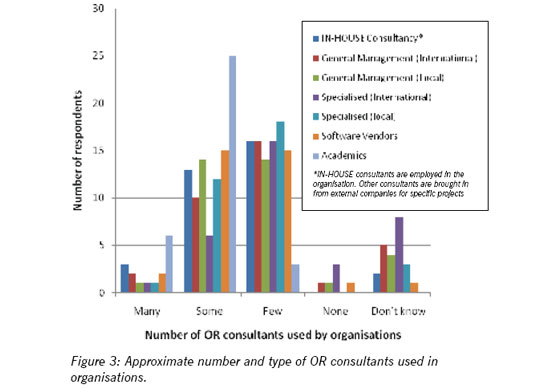 These responses indicate that only a few organisations are known to use OR consultancy in most countries.

Question 3: What is the extent of your knowledge of OR consultancy in your country?

Good information is expected from 21 countries:

Limited information is expected from 8 countries: Austria, Belarus, Brazil, Czech Republic, India, Hungary, Israel and Korea. No information is
expected from 5 countries: Malaysia, Serbia, Greece, Croatia, and Mexico. Four countries (China, Germany, New Zealand, Uruguay) said that much OR practice was provided via academic consultancy, whilst four countries (Germany, New Zealand, Germany, Uruguay) said much was via external consultancies, rather than in-house consultancy. Six countries (Sweden, Ireland, Hong Kong, Korea, Austria, Uruguay) reported that OR methods were being used without the practitioners using (or being aware of) the OR label.

Question 4: How many OR consultants could you contact for this survey? 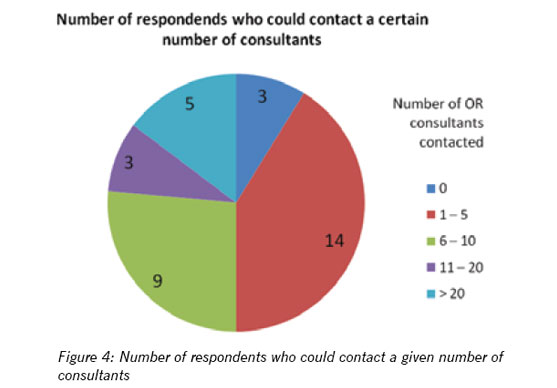 Half of the countries expect to be able to contact more than 5 OR consultants for completing the main questionnaire.

Question 5: Is there any additional information you would like to see collected?

Several countries made suggestions which we have taken into account in designing the main questionnaire.

Overall there seems to be limited awareness by Representatives (and in some cases by Presidents & Secretaries) of OR practice in many countries. EURO (13 countries) and APORS (5 countries) may be able to provide realistic regional information. A few countries have commented that much OR practice is carried by academic and/or external consultancies. Several countries have commented that they are aware of OR methods being used without those involved labelling themselves as OR practitioners Fifteen countries have not responded to this initial Questionnaire, including some with mature OR communities (including INFORMS, Canada, Japan and Australia). INFORMS have offered to participate in the second stage via their Roundtable, as has the UK via their Heads of OR Forum. Further attempts will be made to obtain responses from the remaining countries. It is planned to send out the main questionnaire during March/April 2010 and it is expected that responses will be received during April – July.