Consistently committed to the promotion of OR in developing countries, IFORS has continued to improve the IFORS Prize. The 2011 IFORS Prize for OR in Development competition differed from those of the previous years in the following ways:

The 2011 IFORS Prize competition recognized 22 full papers as valid entries. The process of selection was very rigorous and the eight-jury board was unanimous in selecting the eight finalists from eight countries. It was observed that some of the submissions have a team of researchers from both developed as well as developing countries.

All the 6 finalists (two papers were not presented since the authors could not come at the last moment due to reasons beyond their control) presented their papers on the first day of the conference. The criteria used for the selection process included: problem definition, creativity, appropriateness, OR content, structure and organisation of the paper, stress on development, actual/ potential impact of the study, oral presentations and handling of questions.

This evaluation led to the following decisions which were announced during the conference banquet of 14 July: 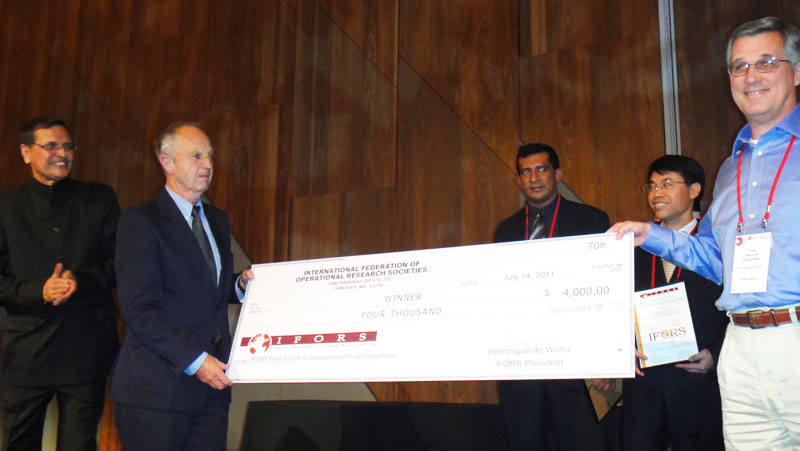 First prize certificate and prize money of USD 4000 was presented to Joao Neiva de Figueiredo and Miguel Angel Marca Barrientos for their paper titled “A Decision Support Methodology for Increasing School Efficiency in Bolivia’s Low Income Communities”. The paper used a DEA based DSS methodology for increasing School Efficiency with available scarce resources and sharing best practices across the network. The model was implemented and is continuing to impact a huge number of disadvantaged children in Bolivia’s poverty stricken areas. The paper was recognised for the approach and methodology to improve effective education as a means to help the most disadvantaged section of society move out of poverty.

Led by Subhash Datta, other members of the jury were  Jan Van Vuuren, Celso Carneiro Ribeiro, Elise del Rosario,  Leroy White,  Hugo Scolnik, Theodor Stewart, and  Arjan Shahani. Only the first four were around to participate in the final judging, the results of which came out after a very long deliberation. The other four finalists (in the order of country where the application was implemented) who were presented certificates of distinction were:

The end of the July 14, 2011 presentation ceremonies marked the beginning of preparations for IFORS Prize 2014. The Prize has undergone many changes since its start in IFORS1987. Even as more changes will be introduced, the goal remains the same – to recognize practical OR work conducted to assist specific organizations in their decision-making process with the end of contributing to advancement of a developing country environment.