IFORS President Elise del Rosario was on hand to welcome participants of the 8th International Symposium on Operations Research and Its Applications (ISORA09), held from Sep 20 to 21, 2009 in Zhangjiajie China. An APORS-supported annual meeting, the conference was attended by over 120 participants. In her Opening Plenary, the IFORS President described applications of OR that show the power and versatility of the OR discipline through numerous examples she has worked on. She ended by exhorting OR workers to help address the challenge, along with IFORS, of making OR useful to more people around the world.

Organized by Asia-Pacific Operations Research Center (APORC) and the Chinese Academy of Sciences (CAS), ISORA has traditionally been convened in China every two years since 1995 and in recent years, has become an annual Asian and Pacific Rim meeting.The Operations Research Society of China (ORSC) and the Operations Research Society of Japan (ORSJ) have formed the core group in pursuing ISORA goals of providing an international forum where scientists, researchers, educators, and practitioners of OR/MS could exchange ideas and approaches, present research findings and state-of-the-art solutions, share experiences on potentials and limits, and open new avenues of research and development, against a backdrop that showcases the various facets of the Chinese culture and its tourist attractions. The previous seven ISORAs were held in Beijing, Guilin, Xi’an, Yangtze River, Tibet, Xinjiang, and Lijiang. The conference enjoys the generous support of CAS and National Science Foundation of China (NSFC) and has historically attracted many international scholars.

The 8th ISORA was held in Hunan’s Zhangjiajie. Co-sponsors of ISORA 2009 included the National Natural Science Foundation of China, Nazan University of Japan, and Changsha University of Science and Technology. Published proceedings indexed by ISTP can be found at http://www.aporc.org/LNOR/10/.

In the opening session, symposium co-chairs Prof. Xiang-Sun Zhang, former president of ORSC, Prof. Masanori Fushimi, current ORSJ president, welcomed the participants. IFORS president Elise del Rosario also expressed appreciation that the conference is taking the initiative to reach as many OR professionals in the region who would otherwise not have been able to participate in the enriching exchange of ideas that happen in OR conferences. This was followed by plenary talks by Elise del Rosario, Guizhen Liu of Shandong University China, and Hiroyuki Kawano of Nanzan University Japan.

Prof. Tatsuo Oyama, vice president of IFORS representing APORS, was one of the co-chairs of the conference. Over the years, he has been instrumental in coordinating the ORSC and ORSJ linkages.and has consistently played a key role in the ISORA.

The conference was not only academically enriching but also afforded a lot of opportunities for social interaction through several banquets and the one-day outing to the amazing Zhangjiajie National Park in Central South China. The success of ISORA 2009 owes much to the efforts put in by the ORSC secretariat and local organizers from Chinese Academy of Science. Announcements for the forthcoming ISORA2010 will be available at http://www.aporc.org/ISORA/2010/. It is tentatively scheduled for mid August of 2010, at Jiuzhaigou, another famous nature reserve in the north of Sichuan Province. 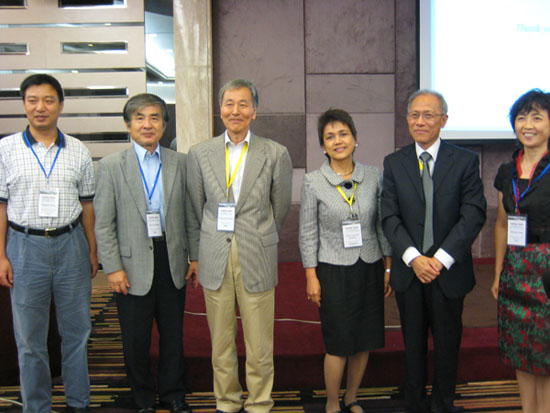